This week it started to feel as though we have finally made it past the hungry gap. The early months of the year are well known for having slim pickings when it comes to fresh food. Our stores of roots, tubers and squash are starting to dwindle. During February and March, apart from the stalwart kale, few plants are still standing in the kitchen garden.
The first warm weather of the year brings a welcome break with fresh spears of sprouting broccoli and the tang of rhubarb. By the end of April we are starting to bring in tender asparagus shoots and early sowings of salad. It won’t be long and there will be peas, beans and strawberries to fill our bellies. Unfortunately, it takes months of meticulous planning and careful attention to grow. Thankfully, Mother Nature is currently feeling particularly generous.
Recently, I’ve been able to take advantage of a new crop of fresh green shoots. I have been supplementing my diet with flavours directly from my surroundings. I was stunned by how delicious pasta could be with a dressing of pesto made from the wild garlic, unaware of its anti bacterial qualities. I’ve discovered a love of the luxurious, ‘silky’ texture of nettle soup, and didn’t realise it helps reduce inflammation. I have been enjoying the fresh, cucumber-like taste of cleavers added a water bottle, oblivious to the cleansing effect it provides.

In the coming weeks I’ll be indulging tastes from my childhood with lashings of elderflower cordial. I might use my weeding to provide me with dandelion root coffee. I could make Jack-by-the-hedge sauce for my Sunday lamb roast. I’m looking forward to an Autumn filled with roasted hazelnuts, blackberry jam, and sloe gin. If I’m lucky, I might even find a few tasty mushrooms for a Sunday fry up.


It’s easy to forget that every one of our cultivated crops has been carefully selected from a wild relative. The wild plants that fill our countryside are perfectly adapted to the variable British weather. They rarely suffer from problems with pests or diseases and do not need our constant care and attention to flourish. Before we had the luxury of a supermarket to provide our every need, the average person would need to have an impressive knowledge of the plants that grew in their vicinity and their many uses. In times of scarcity they would have provided a valuable supplement to our diets.

These skills have been gradually eroded by the progress of technology, but in recent years there has been a resurgence of interest in their use. Chefs eager to give a stamp of seasonality and locality to their cooking have rediscovered the culinary delights just outside our doors.

We should be careful about how we pick. Always choose a safe site, away from any pollution. Only pick things you can positively identify and are abundant. Only pick a small part of the total ‘crop’ and trying not to take the whole plant, so it can still survive and reproduce. In many ways, rather than depleting our dwindling wild life, foraging could provide a valuable way to reconnect people with nature. By spending time identifying, noticing and eating these plants, we greater appreciate their value and vulnerability. Rather than encouraging people to ransack the countryside, it can help us to further understand the interconnectedness of life, and strengthen our desire to protect and conserve it. 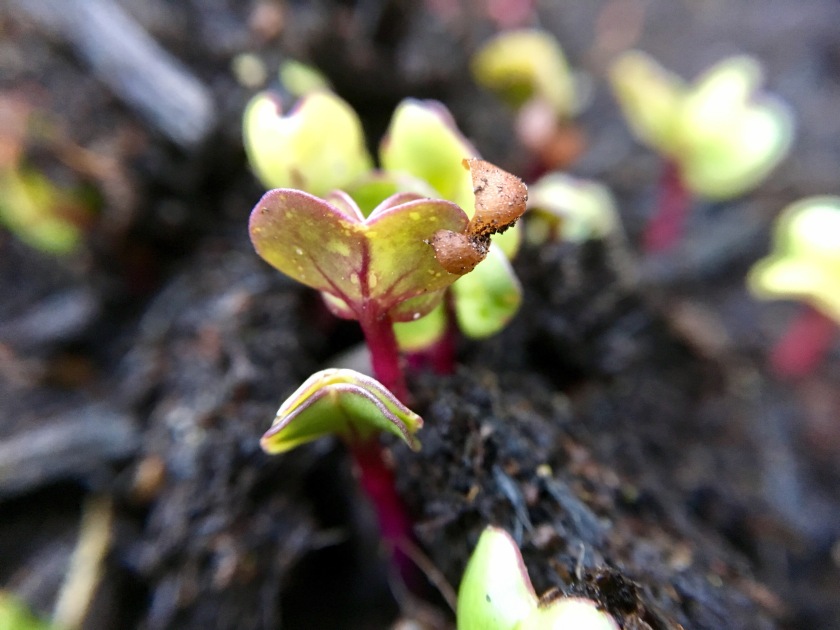 “Optimism is the faith that leads to achievement. Nothing can be done without hope and confidence” – Helen Keller

I think that gardeners must be natural born optimists

The process of sowing a tiny seed, no bigger than a speck of dirt, in the vague hope that after 6-months of careful care, it may finally become a meal for my family is, to say the least, ‘looking on the bright side.’

Our instincts urge us to do it. We are full of hope and good wishes and, despite the many challenges we know this seedling will have to endure over the course of its life, we are still convinced that it can make it all the way to maturity and succeed in fulfilling its destiny.

Our intellect tells us it can be done. We have read all the information on the packet, researched this plants needs in books and on the internet, and from many years of repeating this process, we know for sure that it can be done.

We put to one side the threats of slugs, aphids and rabbits who all want to devour our crops. We ignore the omen of impending plagues of blight, mosaic virus or mildew and continue with our quest, sure that this little one will be the one that makes it.

This rose-tinted view of the world is not without its pitfalls.

Just this last week, struck by the bug of optimism that hatched during the recent warm weather, I had been lulled into a false sene of security. Inevitably this resulted in frantic evenings spent wafting a thin veil of horticultural fleece over my little babies in the vague hope I would be able to fend off Jack Frost’s icy touch.

It’s not unusual to get the occasional frost in April, or even early May, but it can be nerve-wracking at a time we are hoping to give the best possible start to our current brood. It is rare that it will cause major catastrophes in the garden. There may be a few young shoots, nipped in the bud, a premature thinning of fruit, or a minor setback for early potatoes. Thankfully the early losses are likely to be offset later in the year. The reduced yield of grapes I can now expect from my vines will be offset by the fact that any fruit they do now produce will be much juicer and sweeter as a consequence of their more focused energy.

After growing our own food for millennia we have carefully adapted our systems to try to optimise our yield. Our ingenuity has developed advanced technology such as glasshouses and heated propagators, which allow us to further extend the growing season, extracting every possible growing day out of the year. Our instincts however are urging us to start planting our tender fledglings at the first sign of good weather, despite knowledge and experience nagging at us to do otherwise.

Our behaviour is influenced much more than we could ever realise by our environment and situation at the moment of making a decision. We are only able to base our decisions on what we have seen or know. Even for the most experienced of us, our limited frame of reference will often fail to take into account the whole range of possibilities and their relative probability. This inevitably leads to overconfidence and a natural tendency in us all to over estimate benefits, whilst underestimating risk.

This tendency of human behaviour was studied for many years by the social psychologists Daniel Kahneman and Amos Tversky, who called it ‘Prospect Theory’. Their theory states that people make decisions based on the potential value of losses and gains, rather than the actual probability of the final outcome.

During the initial phase of decision making, the possible outcomes are ordered and set against reference points. This allows us to create a frame where lesser outcomes may be considered losses and greater outcomes as gains. The next phase is evaluation. People tend to calculate a value (or ‘utility’) based on the range of potential outcomes and choose the alternative which appears to potentially deliver the highest utility. We are often biased towards avoiding losses, as we know they will hurt us more than any gain will make us feel good. This is known as ‘loss aversion’. This principle is used to explain why the same people will often buy both lottery tickets and insurance, although statistically the beneficiaries will always be the companies that are selling them.

But once in a while, a gamble pays off. A gossamer thin layer of horticultural fleece proves to be the dividing line between life and death, protecting the seedlings from the ravages of the cold, so they can live to fight another day.